Most of us are familiar with ‘The Flipper’. Its behavior catches our eye, which is part of its flaw – poor guy. It’s distracting, taking attention away from its kit companions. And, if it doesn’t have what some refer to as “heart”, it can become a frustrating part of training a young kit. As the term suggests, it flips (a single backward somersault) very frequently and does so for a significant amount of the time it spends in flight. It’s young, typically 2-3 months old and on the cusp of “coming in”. It behaves a bit like this: flip, one one-thousand, flip, two one-thousand, flip, three one-thousand, etc. It might get 6-10 flips in before it takes a small break, then starts the cycle over again. It’s a hell of a workout for any bird. 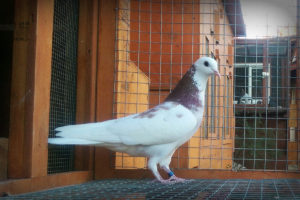 I can hear the impulsive screams as I write this: “cull!”. One shouldn’t dismiss this young roller just yet however. This roller works hard, and I’d bet it’s the hardest worker in the kit. What makes its behavior exhausting isn’t the flipping itself. If it has heart, the urge and drive to keep up with the kit is what wears it out. If it doesn’t have heart, well, that’s a different and frustrating scenario that we’ll get into later. For now, remember, you made this pigeon. That is, you orchestrated its creation. Your own Frankenstein monster. It’s for this reason and one other that I’d humbly suggest individuals have a reasonable amount of patience with rollers displaying this behavior. The other reason? It’s likely to become the best roller in the kit- eventually.

This doesn’t always materialize, and, obviously, it depends on several factors, but a good amount of rollers that overcome the hurdle become the type that elicit reactions like “oohs” and “aahs.” As with most things related to Birmingham Rollers, little is certain. We can’t assert much-as a matter of fact- when it comes to performance or potential for great performance. With this in mind, however, we can assert the following:

So, how does this roller evolve from being the flipper to the high performance Birmingham Roller? It doesn’t happen from one day to the next. After approximately a month of displaying the flipping behavior, there is an unknown factor that leads to two distinct paths caused by a new behavior – it beings to roll.

The factor or trigger than brings about this change is perhaps the most interesting variable, but we can only make assumptions about it. It could be psychological; for example, the roller becomes aware of the benefit of rolling vs. flipping, which is that the rolling action satisfies the impulse much more than simply flipping. Perhaps it’s a physiological trigger that enables it to physically begin rolling to alleviate the impulse. For instance, it could be tied to muscle development. Once its muscles have matured to a certain point, it may trigger something that makes it transition from flipping to rolling. Or, it may be combination of both. Regardless, this roller may now transition from flipping to rolling a few feet with decent speed then evolve to a Birmingham Roller that can execute an excellently choreographed 30 foot blur at once a minute or two. A blessing in disguise.

Before we look at the other path this roller may take, it’s important to again point out the potential higher energy or nutrition requirements of this pigeon. It’s very likely to be the hardest worker in the kit, specifically while it’s going through the flipping phase. And, similar to a high performing athlete, this roller requires more energy and thus more than the reasonable kit bird allowance of feed. If the pigeon is expelling more than it’s receiving, it may very well break down, i.e: rolldown. Feed this roller up. If you feed one tablespoon per kit bird, for example, give this particular one an extra tablespoon. This bird is expelling more energy in comparison to the rest of its kit companions. If it begins to show difficulty keeping up with kit at the flipping phase or afterward, try feeding it an unlimited amount.

If the pigeon doesn’t become a great roller, or it doesn’t have “heart”, unfortunately you may experience quite the opposite scenario. This other path involves this strong impulse overwhelming the roller so much that it may show signs of not wanting to or an inability to fly. It may begin to land early (or after only a few minutes) or on undesired areas. If that isn’t bad enough, a habit that can be introduced is a disinclination or refusal to kit. And the worst, it may begin to roll with little or no control and rolldown. Good luck. At this point, if the fancier has the patience and space, the recommendation is to hold it in (not fly it) for a minimum of three weeks, feeding the bird as much as it would like in an effort to strengthen it physically. If held long enough (3+ weeks), the assumption and hope is that it may also mature psychologically.

These rollers aren’t for everyone, I get it. For example, the fancier who breeds hundreds of rollers a year may not have the patience or room in their process for a higher maintenance rollers. Or, perhaps we might not want to stock birds that show this behavior for fears that it can be passed on. Agreed. As we strive to evolve the hobby and stock as a whole, we should be very selective about what is used for stock. Using a flipper for stock may be questionable; however to varying degrees, many if not all rollers go through a flipping stage. For many, it may be discernible or the phase may only affect them a few days and goes unnoticed. At the very least, the flipper can become a twentieth of a great kit. It can also be the key to a competitive winning kit or the champion performer of your loft. Give it a shot. With an open mind, we should try to do as much for these pigeons as they do for us.